An Evening With Alaskan Whales

On a placid evening in the midst of the most southern of the southeast islands of Alaska, a group of humpback whales came together for one of the most memorable whale shows I will ever see. They were working together to feed as one; bubble net feeding. I have described bubble net feeding in my entry on “The Feeding Habits of Whales and Bears”, so I won’t give you the full details of this behavior again. A short synopsis of the bubble net formation is thus: The whales dive in a row, blow a net of bubbles around a biomass of baitfish, and lunge through that net as a group, collecting mass amounts of fish in their gaping mouths.

It was a beautiful evening. It was calm, just before sunset. The light was warm on the skin, and brought out warm colors to the eye. The light was fantastic. We motored up on a large group of bubble net feeding humpbacks, and it was a good show. Everyone was on deck, setting up cameras, holding binoculars, or simply watching these magnificent creatures.

Notice the perfect circle around these whales. That is the bubble net percolating at the surface.

I had ran down to my hook to grab my camera, and ran up to the lido (the highest deck of our ship) to get a good view. When I got there, I turned on my camera only to find, a low battery signal. I paid it no mind, and set up a perfect shot of the whales in the sun. Before I could snap the shutter, the camera died. Dead. I decided to run down and get my spare battery, before the next surge, and I found that this battery was dead as well. A photographer’s worst nightmare! I laughed. What else could I do? I put myself in this situation, and nobody but myself was to blame. So I ran down to my room, and put my batteries to charge, while I ran back up to the lido, to take in the evening.

I had to put up with my chief engineer Clay, give me shit about Nikon cameras (I’m a Nikon guy, he’s a Canon guy), but I didn’t let him bother me. I had whales to watch.

We were dead still, our mate didn’t dare move the boat as the whales had followed the herring balls right next to our boat, and they dove near us, heading in our direction. By law, we have to stay 100 yards away from all wildlife, but we can’t endanger the wildlife by moving if they come at us, so we held still. The whales had dove down, and as I looked over the edge, the tell tale circle of bubbles began to appear, making a small arc on top of the water. Then, there they were, not more than 100 feet away, bursting through the surface with their enormous mouths gaping open with herring pouring out of the sides of them. The seagulls were going crazy. Nine Whales had surfaced devouring a vast amount of herring in a single surfacing. It was AMAZING, it was AWESOME, and I’ll probably never see a better whale show than that in my life. It was a top five life moment, and the best part was, I had no distractions. My camera was safely tucked away on my bed, and I could simply live the moment. Sometimes things work out better than you could ever plan.

Forty-five minutes later, as the sky had turned pink in the west, and I was finally off shift. I grabbed my camera with a moderately charged battery and went back up to the lido to try to get a few shots before the light went away, and we continued on our way. The whales gave me several chances, but the light was bad.

Meanwhile, more whales had joined the nine, and they broke up into three separate groups of bubble net feeding humpbacks. It was fantastic! You could time them, and there was constant herring carnage going on. One group would erupt, and then another, then the last, but they had good timing so I didn’t have to wait long before the next group burst through the surface. 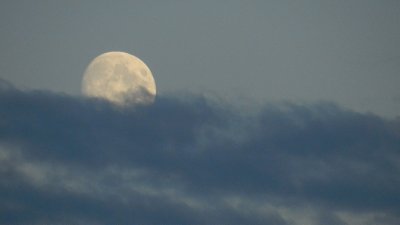 I looked to the east, and the moon was rising through the scant cloud cover. It was beautiful atmosphere, a rising moon, to a setting sun, and a good spectrum of blue in between.

Finally, with my last chance, the whales and lighting cooperated; they were off in the distance, a couple hundred yards away. Behind them, the rich pink of the sunset afterglow was vibrant. A nice band of spruce from a nearby island formed well with the sunset. I waited, watching the seagulls begin to swarm to the surface. Seagulls are great indicators of where the whales will appear, as they want the stunned herring the whales leave.

They broke the surface as one, and I tracked them to the apex of their momentum, taking the photo you see here. 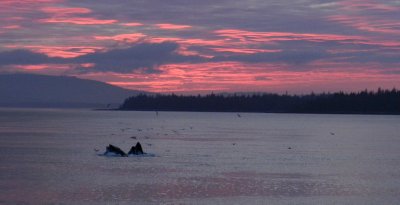 I knew they would probably dive once again, and I composed the back ground so that I could time a whale fluke for my last picture of the night, once again they cooperated, and the shot perfect. 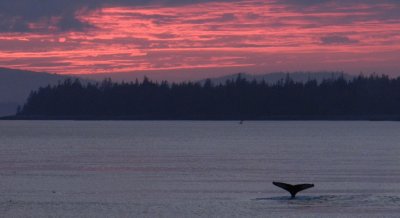 I am a lucky man. In pursuit of my happiness, I keep finding in just around the corner. 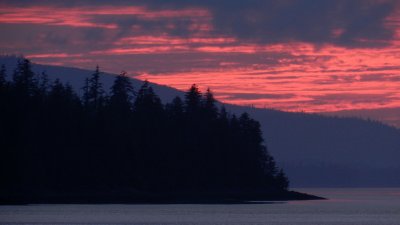 This marks the last of the Alaskan whale shows for the year for me. Next time, I’ll talk about my journey through the Misty Fjords, and the ethereal world of the inside passage of British Columbia.