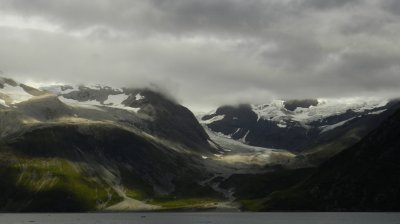 The day began innocently enough. When I stepped into the daylight, my first sight was that of the Margerie glacier. It was a good first look at the world, its jagged ice face holding fast in the early morning light. It was beautiful, but not in a picturesque way. It was beautiful to stand in the cold open air looking at the glacier still deep in shadow holding absolutely still, in muted pale blues of early mountain light. It was like standing alone in a beautiful ice temple, or standing knee deep in a forest watching the snowfall; it left me feeling good about everything. 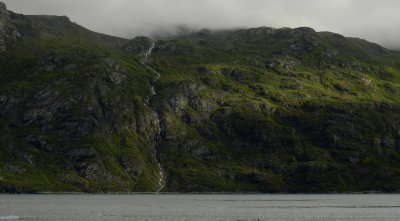 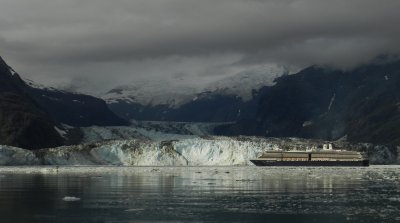 The day only improved from there. We motored across to look at the John Hopkins Glacier, which is one of the few glaciers in the world that is actually expanding. This was the first time I saw the John Hopkins, as thick sea ice blocked our passage earlier in the summer. The John Hopkins is connected to the eastern edge of the Gilman Glacier. The faces of the glaciers were lit up in bright morning sun, while the hanging glaciers high above them were still in cloud. 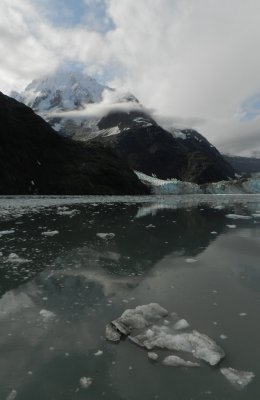 The combination of sun, swirling mountain clouds, glaciers, mountains, and sea were a dynamic force to reckon with this day, and though I didn’t know it at the time, it was a reoccurring vision that made me very happy to be alive. This is my last trip into Glacier Bay for the year. The landscape and seascapes combined with the variety of wildlife made this among the best days I’ve ever had in Alaska. It was a splendid farewell, a final reminder to come back and explore again sometime, that Alaska is still wild and will forever be. 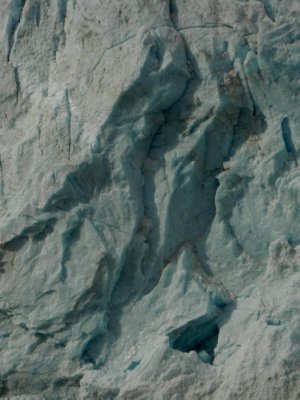 Now, before I get lost into trying to weave poetic justice to the indescribable beauty I hold in my memory, I’m going to let my images speak for me. The point is, it was a beautiful day, and I’m glad I was there to live it. If I never see Alaska again, I’ll still have this trip to Glacier Bay National Park to hold dear. 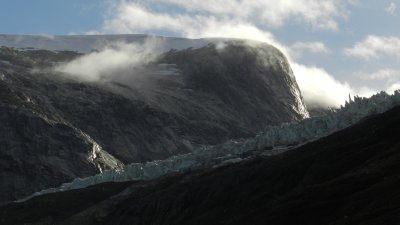 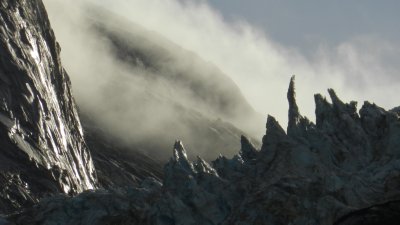 I saw four different glaciers. The Marjorie, the John Hopkins, the Gilman and the Hoonah. The Hoonah was probably my favorite, as it was high up nestled under the shoulder of a high mountain. The swirling clouds were sunlit white behind the piles of jagged ice. It was an easy composition and one of my favorites. 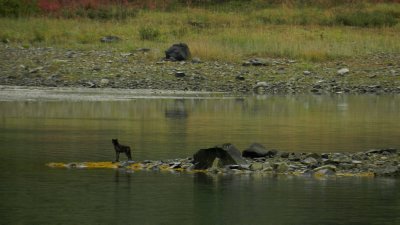 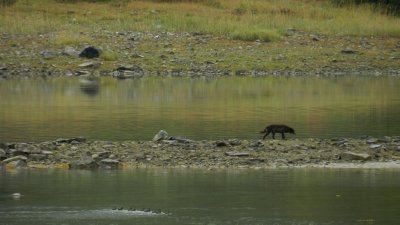 As we cruised along, we saw a brown bear and a wolf sharing the same beach. They were both poking along the waterfront looking for food, or looking for fun, who knows? I focused my lens on the wolf, as this was the only wolf I’ve seen all year, anywhere. It was though it wanted to pose for me, and he walked out to the end of a small spit of rocks and held still, looking off into the distance, before poking around some more and disappearing into the woods. 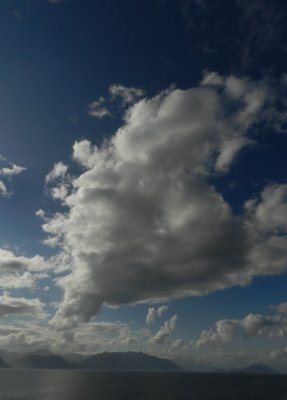 The sky was putting on a fantastic show of its own with playful variations on cloud, color and light. The sky would change its dynamic every twenty minutes, bending light through the heavy clouds, creating a masterpiece of living art. In every direction I looked, another seascape demanded my attention. I was in my element, in the elements, and loving every second. 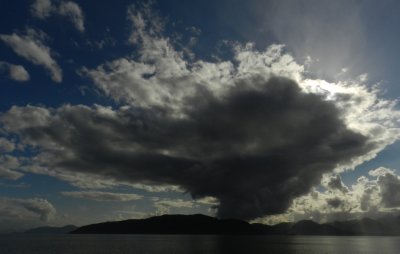 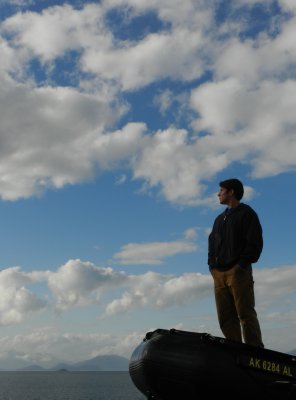 In the late afternoon, we sailed up to South Marble Island, and I don’t think it’s ever looked better. I’ve talked about the Marble islands in past entries (June 10th to August 6th), but my last views were my favorite. I loved seeing the crowded, noisy and stinky sea lion covered rocks and pastel skies one last time. The birds were still living there, the puffins, cormorants, gulls, jaegers, among many others flying in groups through many of the photos I captured. As we left, the sun came out, backlighting the most southerly outcrops in glinting sunlight, offsetting the heavy cloud cover off to the west. Intense sunrays burned through the gaps in the clouds giving the scenes even more layering than I though one scene could handle. In a word, gorgeous. 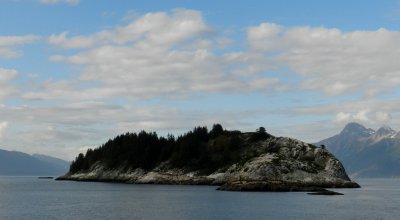 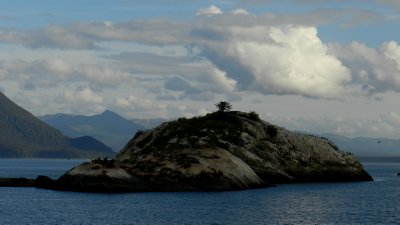 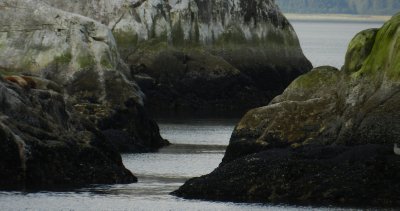 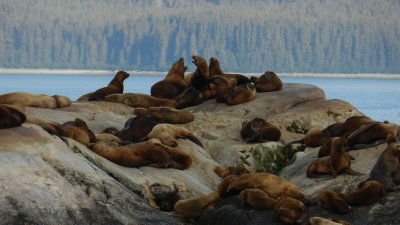 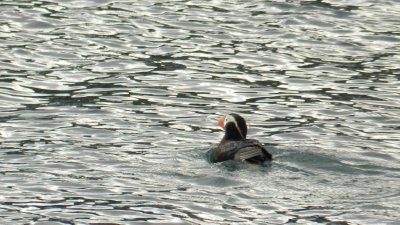 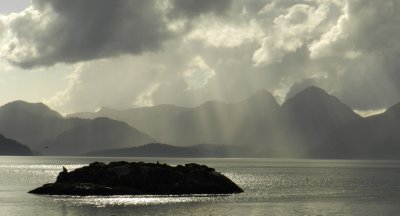 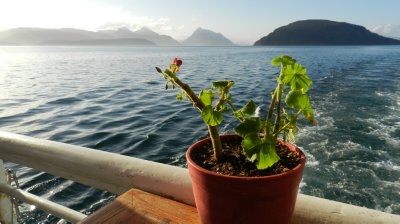 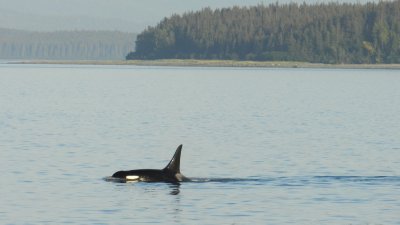 Then as we traveled further south in the setting sun, the Orca showed themselves and we were able to match their pace as we cruised south. A male and female were traveling as a pair through the placid light blue water and with evening sun behind me, the whale and spruce covered island made for good memories. 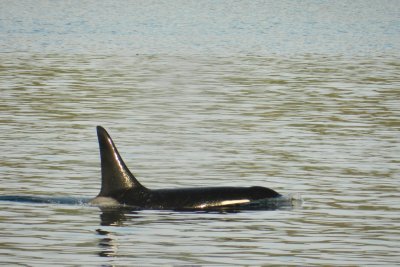 We docked into Bartlett cove for a couple of hours, and I took the time to finish my day with a little exercise. My buddy Luke had his slack line, so I borrowed it and set it up on the dock. We took turns practicing our craft, focusing on balance in the cold night air. Balance is the correct term, for as we walked the line, the sky turned golden orange in the west, the strong afterglow of the sunset. In the east, just peaking above the tops of the dark spruce trees was the pale yellow moon rising through the dark indigo sky. 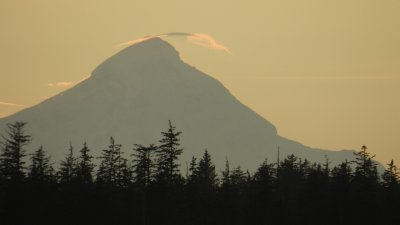 It was one of the best days I’ve ever had in Alaska, a cornucopia of landscapes, wildlife, oceans, visions, photography, and life. It had it all, and I hope there are more days like these in my future. 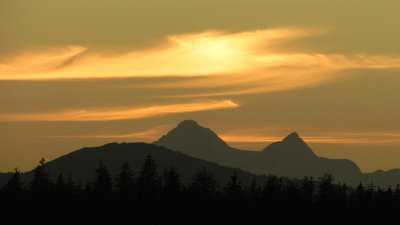