The Assault of Mt. Mansfield

Hiking to the Highest Point in Vermont, The Trails, The Chin, The Enjoyment of Hiking

I began my assault of Mt. Mansfield on a Friday at 8:37 a.m. The apex of Mt. Mansfield coincidently is the highest elevation one can reach in the state of Vermont. It was a worthy venture and a worthy mountain to summit and conquer.

You might be wondering why I’m in Vermont. I had boasted of grand adventures in Denali and Yosemite in past entries, but my path had a few unforeseen twists that changed my travels far to the east of where I had originally planned. Life is great that way; you never know what’s going to happen next.

I digress. I was in the Burlington area for five days, having convinced my injured travel friend that the green summer views of the north would do her some good, and speed up her convalescence. She agreed, and off we went east by north to Vermont. More on that later.

I parked my car in the parking lot of Underhill State Park, some thirty miles east or so of Burlington. I ran off to the loo, paid my daily fees ($3), and loaded up my trusty red backpack with the usual essentials: Clif bars, water, camera, binoculars, and peanuts. I briefly had a look at the map, decided route opting for what looked like the hardest path (the Sunset Trail up to the Chin) and started hiking.

Damn, it felt good to be hiking uphill again! I was designed to walk uphill, I don’t know what it is about it, but I thrive on pumping my leg muscles until I’m gasping for breath refusing to stop until I absolutely have to take a breather.

Since I was traveling light, I didn’t have my usual trusty Danner hiking boots, and had decided to make do with my hiking sandals. I didn’t know if they would hamper my hike, or if they could stand the rigors of the mountains, but they were the best footwear I had for the excursion. Besides, I figured they were probably better than the boots Mallory used to climb up Chomolungma or Humboldt’s footwear as he trekked around South America for five years. I also used a pair of these sandals all winter long hiking the rugged desert peaks of Baja California Sur. They are a good sandal, and I knew they could probably handle the terrain just fine. 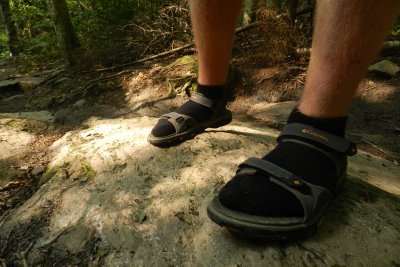 To avoid blisters, I put on a pair of socks. I also felt they gave me a good German look. 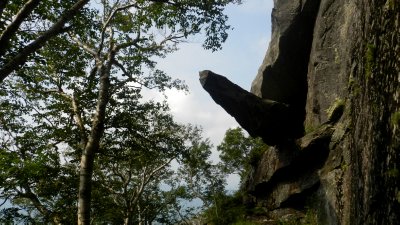 My first distraction was a short spur trail to the “cantilevered rock” a thirty-foot phallus of rock that sticks out of the mountain like a monstrous triumphant wang in all its glory (I bet I could write harlequin romance novels). It was mildly interesting, but I didn’t stay long. I turned back to the Sunset Trail and continued my intensive uphill climb. 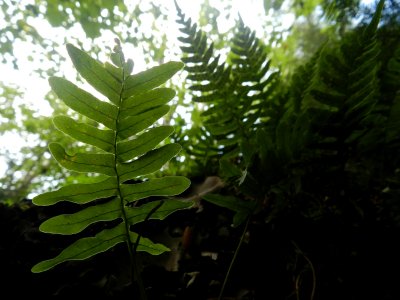 As I hiked higher, I kept wondering if this trail was going to be challenging enough. I was making great time, and hadn’t taken any breaks yet. Having not hiked anywhere in Vermont, I didn’t know if I was getting close to the top yet or not. Then I topped out on the bottom of the long rock ledge that marked the change in elevation and vegetation. I left the hardwood forests of the lower and entered the scrubby pines of higher elevations. I saw before me a broad ridge of gray rock that reached far above me disappearing into the clouds. I had my answer. The mountains of Vermont are for real. 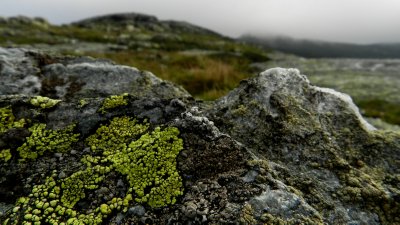 I continued on scrambling up the endless rock covered in green lichens higher and higher passing the stacked stone cairns that marked the trail. The weather forecast for the day had called for scattered thunderstorms, and there were some dark heavy clouds rolling right over the tip of the chin. I wondered if I was going to get rain or worse, having to try to find protection from a thunderstorm on the exposed rock. I gave one heavy cloud some time to pass, and to see if it held any presents. 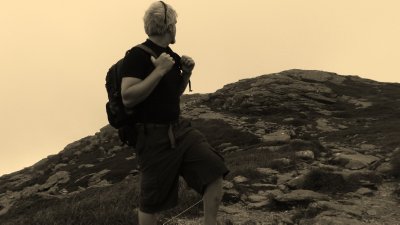 I remained dry, and the unelectrified, so I continued my jaunt up into the clouds.

On top of the ridge, I found I still had a nice view of the surrounding valleys. They stretched out in long forests broken by farmer’s fields in all directions. The cloud remained around me, and it diffused the light nicely as I studied the arctic plants that make this high peak their home. I climbed up to the top of the chin, the second highest point on the mountain and sat down to catch up on my journal, eat some energy, and drink some cool water. It was a good place to rest, and I found a nice rock to rest my weary bones against. 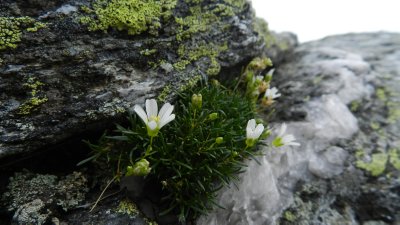 I decided to hike the ridge south to the halfway house trail, which would lead back down to the trailhead. It wasn’t a far walk, and the going was easy now that I was on top. There were no more steep uphill pitches to climb, but instead manageable rocks to scramble over. 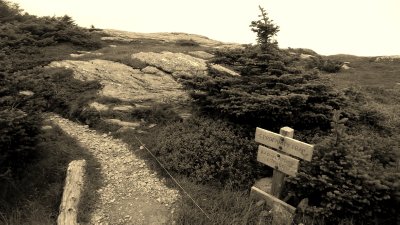 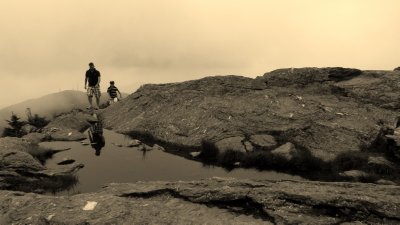 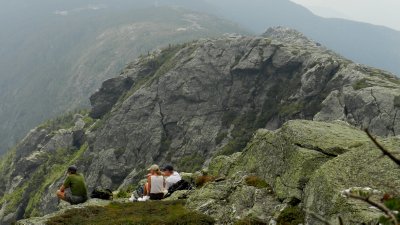 I passed many families along the way. It was good to see people out and about, but part of me still would have welcomed the peace of a single hiker far above the hubbub of the lower elevations. Mt. Mansfield isn’t a wild mountain. You can practically drive up most of it, or you can also take the Gondola from the base at the Stowe Ski Area. On top of the high point of the mountain, a small farm of cell towers were nesting and that kind of took away from the hike for me. In fact, I decided not to reach the very high point, because of the towers. They were too much human interference for my tastes. 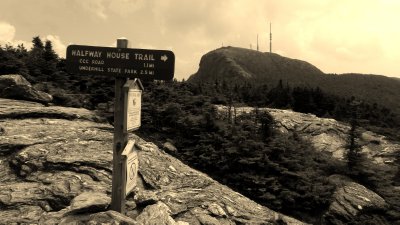 Climbing “the chin” was mountain enough for me, and I considered the mountain conquered. I started back down the halfway house trail, which I found to be quite peaceful. I was the only hiker to take that route and it wound down back into the valley through a lush forest of hardwood and pine. It was quiet and still. When I stopped for a break, I didn’t hear a sound. 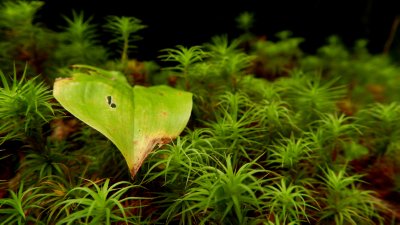 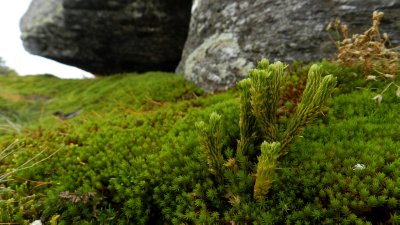 I had to pick my way carefully down the slippery rock. I knew my sandals would betray me if I gave them a chance, and I didn’t want to try some self-chiropractology on my back using rocks, roots and boulders. I took my time and made it down to the old trail in one piece, and in one peace. It was a good hike. If I had to do it over again, I would’ve retraced my route back down the long open ridge of the Sunset Trail. 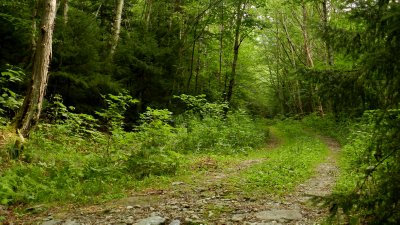 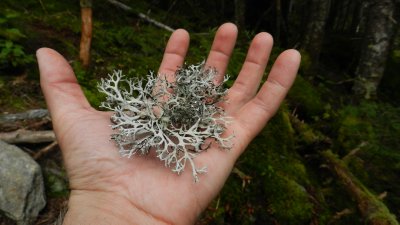 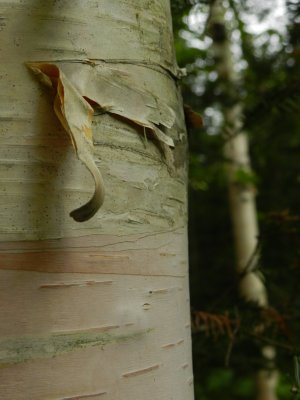 I sat at the trailhead and signed the visitor’s log. I had neglected to do so on my way up, and I figured I ought to at least give them an autograph. I really enjoy signing logs and summit notebooks. They always ask for the same things. Name, where are you from, and Time. I happily penned in my info: “Thom Miller, Homeless (with a smiley face), and No thanks. Time is not necessary for this hike.” I used to sign famous people’s names, or some of my made up aliases. “Peter Pimple” is one of my favorite. I might also quote a piece of poetry for my audience.

Some Thurbur perhaps: “Behold the happy moron, he doesn’t give a damn.
I wish I were a moron, By God! Perhaps I am!”

Smiling to myself, I wandered back down to the parking lot and back to the car. I had traveled seven miles, (give or take) and thoroughly enjoyed my hike up Mt. Mansfield. Sitting in the car, enjoying a cold beverage, and munching some chips and salsa, I called my travel buddy, and inspiration struck. I gave her a “believable” long message explaining to her of how I ended up in New York City instead of climbing Mansfield. My fiction included having the car break down, abandoning it, hitchhiking, a train ride, dumb luck and the statue of liberty. She freaked out a bit, and it had the desired effect. 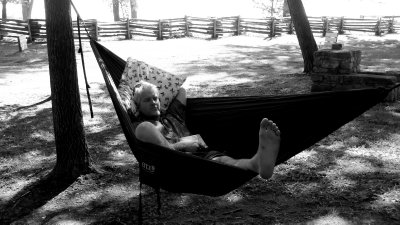 It was all in a day’s enjoyment for this vagabond.

What’s next? More on Burlington, the Adirondacks, and that fantastic tourist trap called Niagara Falls.

this post was for those of us who may think "wangs" are "glorious" i guess.

You seem pretty jaded towards Niagara Falls. What did the falls ever do to you?

I once ordered Chinese food with a friend and we waited. Over an hour later we called them back to see what was taking so long. The store said according to their computer it had been only 15 minutes. We were very hungry and I am not good at waiting.