Eating Habits of Whales and Bears

I’m wrapping up my last week here in Alaska until September. Yep, it’s time for a month off, and let me tell you I’m quite excited about my vacation. Before I go, it seems like Alaska is giving me a farewell party with a fantastic show of wildlife, cloud, and activity.

I’ve talked a lot about the behavior of humpback whales, and now I’m going to attempt to describe one of the more spectacular eating techniques they employ: Bubble Net Feeding. Bubble netting is aptly named-- a pod of whales blows a net of bubbles that captures their prey inside of it. Then as a group, they can swim through the net, gulping their way to the surface.

I’ve seen two sets of bubble netting feeding whales, a small two-whale group, and now a large group of over six whales. There are several steps that go into making a successful net, and the whales have gotten their system down pat.

The whales arrange themselves in a line, and breathe along the surface for several deep blows. Then, as in a game of follow the leader, the first in the group takes one final blow and dives down. Each whale in succession follows it. It was impressive to see fluke after fluke of these humongous creatures dive down. 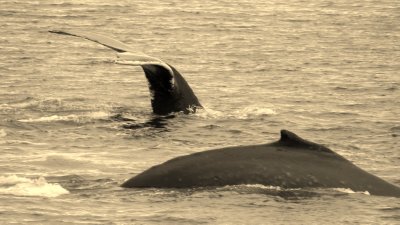 I haven’t witnessed what goes on beneath the surface except on video, but what can be seen from the air is a large ring of bubbles that percolates at the surface. These bubbles are the sides of net. This net is formed as the whales circle the bait ball and capture it by blowing a long steady stream of bubbles from beneath them. The bubbles panic and confuse the fish, drawing them closer in their fast moving defensive swirl.

The whales, having trapped their prey, bellow out a long trumpet like call, akin to a charging army’s cry of “CHARRRRGGGGGEEEEE” and as a group launch themselves through the bait ball opening their humongous mouths-- devouring their prey in gigantic gulps of gluttony. The whales break the surface as one, their momentum carrying them high out of the water. Look at how full their mouths are! They filter out the food with the baleen at the top of their mouth. A baleen is a series of long comb like cartilage that allows water to pass through but not the fish. They hold on the surface for a second, and then slowly sink back down enjoying their bite. The surface of the water is turmoil of bubbles dead fish and froth from which the seagulls get their share of the bounty.

I saw them surface through the bubble at least 8 times and we watched them for over three hours. I wasn’t on deck the whole time either, so this goes to show you the massive amounts of baitfish that can support this kind of feeding. That biomass of fish is impressive. The whales eat their fill, and their summer eating supports their migration south for the mating season.

To hear their trumpeting call as their bubbles trap you must be terrifying. We heard it on our underwater hydrophone, and it is eerily awesome. That call signals the others it’s time to eat and they do so with vigorous relish.

If you don’t have an underwater microphone you can tell where they will surface by the activity of the seagulls. They will signal where the whales will surface, and you can see the gulls get more excited as their lunch approaches.

I with I could have so much fun when I eat a fish stick.

This summer our Bosun, Nikki has been really big on swimming everyday. I’ve joined her several times, as I love jumping in cold water. If you are having a bad day, jump in cold water. It will refresh you, wake you up, and somehow make you feel a whole lot better. We were anchored in Funter Bay, and she asked my deck partner and myself is we wanted to go for a swim. Hell yeah! Why not? So I grabbled my shorts, stripped down on the fantail and without much ado, jumped in. Hot damn, was that some nippy water! Woooeeeeeee. It woke me up, made me feel good and I tingled all over from the experience. It was what swimming in Alaska is all about.

I jumped in two more times to seal in my delight. Then, since I was technically still working, decided I should change and get back to work. Since dinner was being served, I didn’t want to walk through the crowded dining room. I decided to change on the back of the ship, the fantail.

I looked around as I always do when I’m about to get naked in a public place, that ol’ wary eye. The coast was clear, literally, and I dropped my unmentionables in a heap on the deck of the boat. Just then, the captain of the boat walked out to have a smoke. I noticed him, laughed out loud, and said, “Hi, Cap.” Damn my timing. Luckily, I had gone for the towel wrap before I dropped my drawers and so saved the captain from a year’s blindness.

A moment in the life of Thom.

The Brown Bears of August

Brown bears love august. The reason being, the fishing is good. The salmon have begun running up the rivers and streams of coastal Alaska. They are looking to have one last romantic getaway before dying.

The brown bears know this, and after eating greens and carcasses all summer long are ready for a change of diet: Fresh salmon. They come to their favorite fishing streams in singles (males), or families (females with cubs), to eat their fill before passing out for a long winter’s nap.

Today I watched three bears pounce on salmon in the shallows just beneath Pavlov Falls. I’m not sure who Pavlov was, but of Russian descent and probably the first person to hike up this little creek. The fish were plentiful, and the bears make fishing look easy. They simply wait until the salmon get shallow enough, and then pounce on them, hooking their enormous claws into them and mashing them with their bulk against the stream. If we humans tried such a technique, we’d fail miserably.

Then the bear would grab the fish with its mouth, haul it to a nearby rock and eat only the choicest parts, mostly the guts and brains.

Now for some science.

Soil scientists have been studying the soil around these streams and have been finding large amounts of salmon nitrates in the soil. How did it get there? How could so much fish bits be in the soil? So they took samples perpendicular to the stream to see how far back the salmon bits went. They went until they finally found salmon free soil. I don’t remember the distance from the stream but I think it was at least a half mile on either side of the stream.

What they found was that salmon have been fertilizing and enriching the soil around these streams, which in turn gives the forest it‘s impressive lush foliage. How do salmon get into the soil? Bears. The bears catch the salmon, and often will carry their salmon out into the woods to eat in peace. The fish decomposes and turns to soil, and the bear having eaten its fill will digest and pass on the rest of it, broken further down and ready to add nutrients to the soil, making for lush coastal forests.

Now that is a smart natural system. Nothing is wasted, and everything keeps the system working. 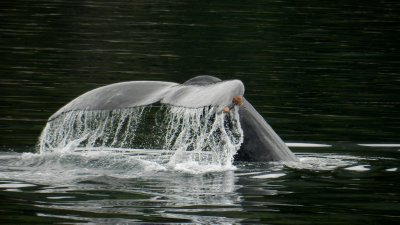 This was the last whale I'll see in Alaska for awhile. I'm pleased that my last memory is that of a humpback waving good by with its gigantic fluke.

Alaska has once again been very good to me, and I'll miss waking up to its tremendous landscapes. I think it's good to take a break from it for awhile, lest I get complacent with the scenes around me. I don't think I ever will get tired of Alaska, but I don't want to take that chance. I'll be back in September and look forward to my return. Until then, stay tuned. This traveller has some fun lined up for August. 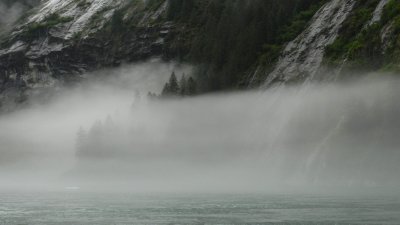 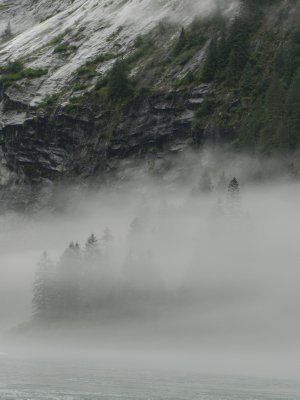 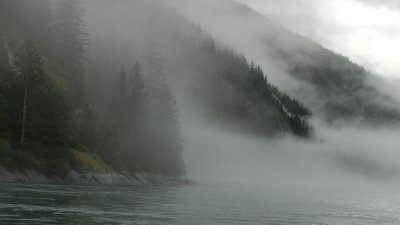 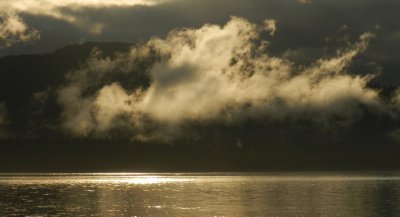