How to Kayak, Thom Style. On Loveable Birds, and Jaw Dropping Scenery

I was sitting on the far side of an island I don’t remember the name of anymore. It’s not important to this story, and perhaps the only important part of this story consists of three elements: Whales blowing and breathing far off in the distance, a small lion’s mane jelly fish puffing just underneath the surface of the water, and the fact I was happily rafted in a thick mat of bull kelp sitting semi-comfortably in a big yellow kayak.

I rafted myself in kelp for a couple of reasons. For one, I didn’t feel like paddling. I just wanted to chill and listen to the sound of the whales blowing and taking in air. Secondly, I know that sea otters often raft up and hang out in the kelp, lounging on their backs and eating clams on the half shell. I’ve been known to imitate animals and the sea otters aren’t a bad animal to ape. Thirdly, I could see a bald eagle in the tree above me, looking for an easy meal. I could also hear the roaring belches of distant stellar sea lions, which I have described in detail in past posts. In short, it was a good place to hang out and be at one with the world. I let my senses free to explore as they will. Since I had been up for almost 20 hours straight, it was easy to zone out and let my thoughts and interests wander. It was kind of like being high, yet much healthier. I’ve only been high on morphine, but that’s another long story for another time. It involved skateboards, emergency rooms and odd memories.

As I gunk holed and relaxed, I looked down and saw a beautiful jellyfish just below the surface of the water. It’s head was perhaps six inches around. It was orange, partly translucent, and happily puffing along. I thought it was beautiful. The contrasted coloring against the dark blue green of the water was fantastic, and I took the portrait you see here. 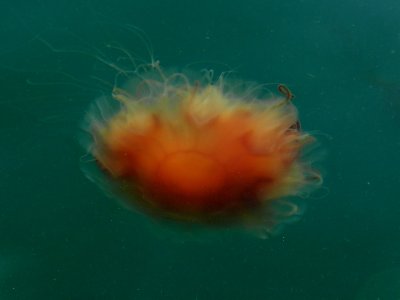 It was a lovely way to spend an afternoon. I’m starting to really like kayaking.

Puffins aren’t gifted flyers. When landing, they tend to crash land into the water instead of gracefully “skiing” in as some of their cousins do. Perhaps that’s part of their charm. They are klutzy beauties of the sea. Here are a few facts about puffins. Puffins are particular about what they eat. What puffins lack in flying ability, they make up for in swimming ability, and they catch their food by diving underwater and nabbing it with their beaks. 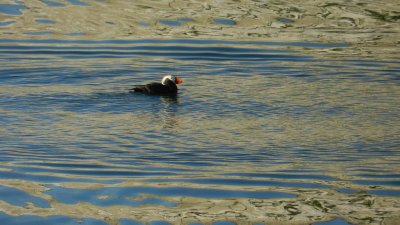 They live and nest in areas where they find their food supply, usually high up on small island cliffs that rise steeply out of the water. Two Islands that I know of that are home to puffins are the Marble Islands in Glacier Bay Nat’l Park, and St. Lazarius, a National Wildlife Refuge located roughly 20 miles west of Sitka, Alaska. I surmise that they like the view, the protection, and they like easy take offs, and short flights to their food that these islands provide.

When puffins take off from the water, they have to take off into the wind. They aren’t aerodynamic enough to fly other directions. They start by winding up their wings and flapping hard. They start padding along the water with their feet, running hard and flapping hard, until they finally get airborne. Then they continue to flap hard, to keep themselves aloft until they crash land once again into their desired location.

Puffins are charming, awkward and cute. If you have the chance to watch puffins for awhile, I’d recommend you take the time to watch these marvelous creatures. 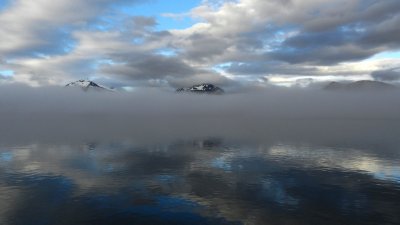 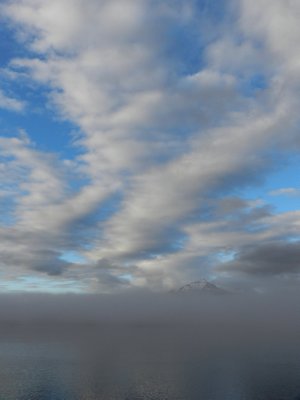 Alaskan mornings are some of the finest I’ve experienced. There are so many dimensions and depths of layers to the land and seascapes. We had been experiencing heavy fog for the better part of the night. In fact, it was kind of like looking at the world through a white plastic bag. We had our foghorn running, and extra watch on the bridge long after the sun had come up. I was working on the aft of the ship when the fog began to break. It started slowly. I looked up and realized I could see the tip of a mountain and scattered blue skies. Then I could see the whole mountain, and watched the swirling mists curl around the spruce trees. With the mirror quality of the water, fantastic patters began to emerge. They held briefly to allow me to appreciate their beauty before transforming themselves once again. The scenes you see here lasted for the better part of a half hour before it had almost completely lifted. During that time, I was transfixed, hypnotized by the swirling mists and captivating landscape. 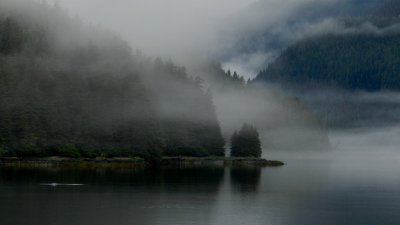 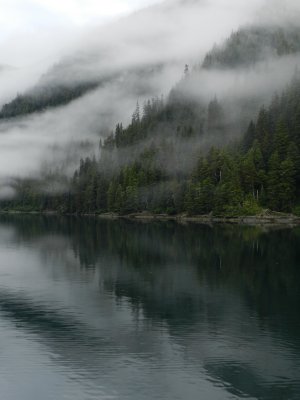 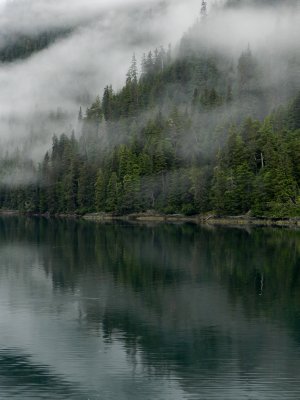 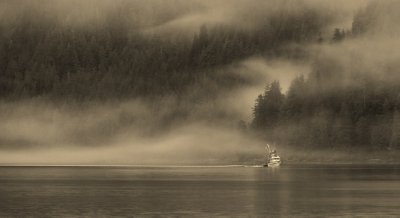 Alaskan Fishermen enjoy some of the most dramatic scenery while catching fish for a living. 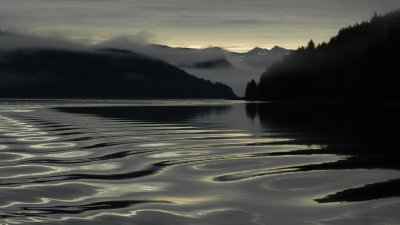 Alaska will probably haunt me in my dreams forever.