A Day Off In Gustavus, Alaska

When Not To Laugh, Concerning Bikes, Flowers, Libraries, Pizza, and The Great Settlement of Gustavus, Alaska

I had spent the last few hours running around the ship wondering why we were sailing at full speed with our “not under command” lights up. I was also wondering why I was the only one working the night shift while everyone else slept and why nobody told me that nobody was driving the ship. I frantically ran up to the bridge to try and steer the boat away from the island we were headed straight for. I awoke to find myself running in bed, thrashing through my blankets. Argh! Only a dream.

So began my day off. I jumped out of bed, threw some stuff in my backpack, took two sips of coffee and jumped off the ship. I walked up to the Glacier Bay Lodge to inquire the cost of a room for the day. I informed them that I was from the National Geographic Sea Lion, looking for a cheap rate. The nice lady at the front desk looked me over (I was wearing my ripped up comfortable jeans, homemade sailor beanie, xtratuffs and raincoat, completely unshaven and haggard from little sleep) and then responded, “Twen… hundred and twenty four dollars.”
I must’ve misheard her. “Could you repeat that?”
“For a standard room it will be two hundred and twenty four dollars.”
I told her I had to think about it, which didn’t require much effort. I thanked her and opted for plan b…

Plan B began with a frantic exiting of the boat and jumping into a cab against my better judgment to be taken to the small settlement of Gustavus, Alaska with two other crew members. One was going to Juneau for the day, and the other looking for a cheap room to hole up in. The taxi driver unceremoniously dropped me off with Pete at The Gustavus Crossroads. When the driver took my 40 bucks and tucked it into his front pocket without offering me any change, I swear I heard blues music coming from somewhere. The dude made 40 bucks for a five minute cab ride, and left us standing on the roadside wondering what just happened. I’ll admit, my mind wasn’t really operating on all cylinders yet, and so I was literally “taken for a ride.” I guess I’m a sucker.

So Pete calls up the nearest motel to find out they also charge 200 dollars a day for the experience of staying at an Alaskan Bed and Breakfast. Pete gave up and wanted to go back to the lodge to hang out, and not wanting to face the shrewd cab driver again, we decided to hitch hike. When your best options include hitch hiking you might ask yourself if the decisions you’ve made up to this point in your life have been good ones. 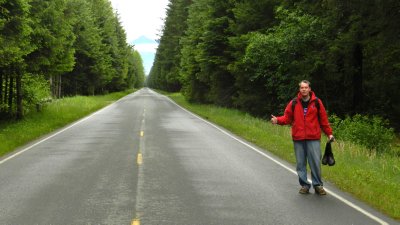 The first guy to pull over was a true Alaskan wild man. Dirty blond hair fringed light on a dark tan face. He had a hunk of chewing tobacco in his lip. He wore a dirty blue jean jacket and jeans (some call this a Canadian Tuxedo) and a deep sullen voice. He drove a rancid old ford that looked in no worse condition than he did, and told us that he wasn’t going as far as we were. He looked like an axe murderer. We hopped in anyway. I sat up front with him, while Pete hopped in the greasy back of his pickup.

I’m seriously trying not to laugh my ass off at this memory. I’m writing this at the Gustavus Public Library, and I’m dying. This guy looked like an axe murderer, and yet we blindly jumped right in his truck like the rubes we are. Silence. He didn’t speak. I didn’t speak. I pondered my last few minutes in this world. I got the giggles. I didn‘t dare to snicker, as I didn’t want to upset “Spike.” I’ve found when I have to laugh, but due to circumstances beyond my control, I can’t, it makes me want to laugh even harder. I had to bite my lip to keep from busting a gut and laughing at the incredible start to my day. I looked back at Pete huddled up against the cold wind, looking less than amused, and damn near lost it.

He let us out several miles up the pike from whence we had come. When we got out of his truck, I burned up some good laughs and we carried on walking through the dense forest of Alaskan’s temperate rain forest. The second ride was unremarkable, and we arrived back at the lodge thirty minutes later, 40 bucks poorer, and hungry.

I decided to eat breakfast which would improve my day immediately. Then I parted ways with Pete, opting to rent a bike while he chose to relax at the lodge.

Finally, I felt in control of my destiny, and my day began to take shape in a series of enjoyable experiences. On the way to and from Gustavus, I had seen a couple of scenes that I wanted to investigate with my camera. Alaskan wildflowers are gorgeous, and so I set off down the highway I had so recently traveled this time at a much slower, less expensive, and much more enjoyable pace. 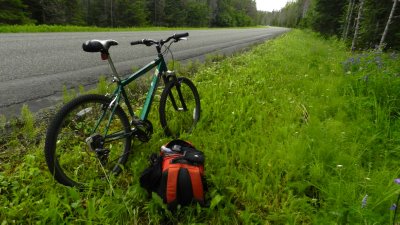 The bike was dark green, of a mountain variety. It was missing its front brake, needed some oil and tapped out a six count rhythm for every three rotations of the pedals. “TAP, tap, tap, tap, tap, TAP…TAP, tap, tap, tap, tap, TAP.” The front wheel was slightly oblong and losing some air, but outside of that, she was cherry. I didn’t mind, and set out down the road, tapping my way to freedom. 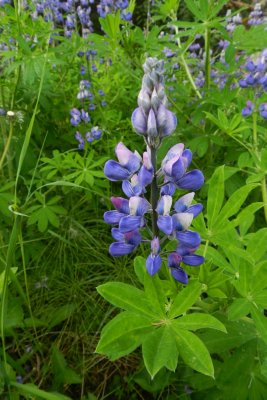 I stopped to admire some lupines that were out along side the road. I love lupines and perhaps they might be my favorite Alaskan flower of mid-summer. Moving along, I found a wet meadow full of what I believe are Alaskan cotton, but I‘m going to call them “Thom Heads.” It was in these plants that I found a kinship. I used to think that dandelions were my kin, but even with their fuzzy white heads, they don’t compare to Thom Heads. The heads of the cotton were soft, shaggy and blond. They reminded me of a sheepdog, and if I grew my hair out, it would look eerily similar to these plants. 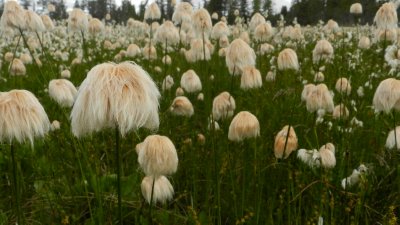 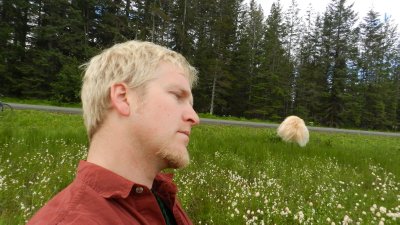 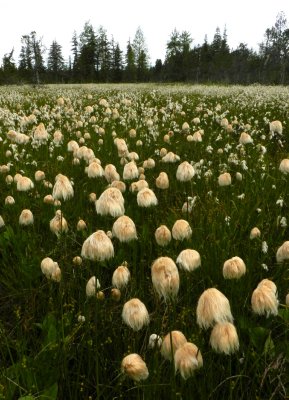 I enjoyed my bike ride. It was cool out, perfect temperature for a ride. It was overcast, but the clouds offered no rain. I pedaled on in a pleasant mood, happy to be free of the ship, happy to be biking along a deserted road through a beautiful forest.

One really great thing about biking on Gustavus roads is the fact that everyone waves at you, and it was fun to wave back. I immediately felt like part of the community, and I blended in perfectly with my classic Alaskan ensemble. Those three words were probably never put in the same sentence before, and I want to take credit for it. 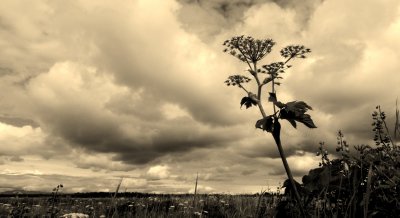 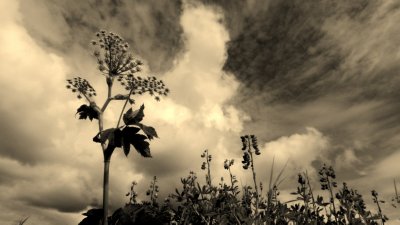 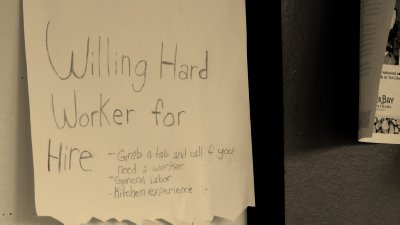 Anyway, I made it into town and stopped once again at The Crossroads. I stopped into the gallery to get a mocha and called up my brother. It was nice to sit in the shade at a small table and talk with him. Staying connected on a ship is hard, and it was good to chat with one of my people for awhile. 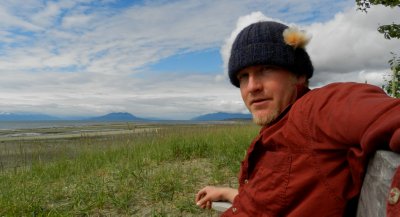 I moseyed down to the beach and found a likeable bench to lie around on and read my book. I’m currently reading, “As Told at the Explorer’s Club” Edited by George Plimpton. A fascinating read about all varieties of adventure. Then my phone rang, and it was my girlfriend. What luck! I spent the next hour catching up with her, and making up for lost conversations. She works on The Sea Lion’s sister ship, The Sea Bird, and so while we might pass each other in the night, I haven’t seen her since May. Such is the life of a sailor. 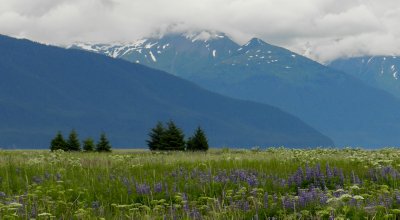 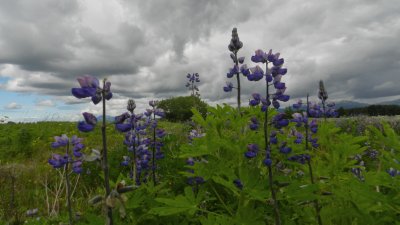 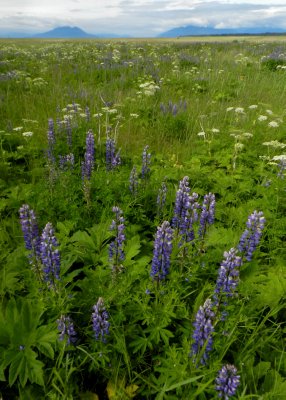 After my long siesta on the beach, I went to the library to surf on the ‘information super highway.” My favorite part of the library was the fact they made you take your shoes off, and everyone walked around in socks. At closing time, I was “socked” out, and made my way to The Crossroads and the Homeshore Café. I had been told they sold pizzas and beer, a combination I had been looking forward to all day. I was not disappointed, and they served up a great pizza using fresh ingredients and lots of love. 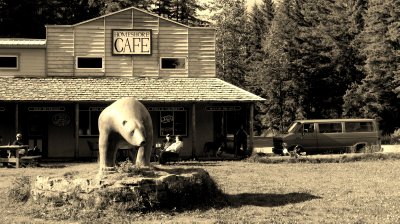 Fully satiated on carbs, I was really looking forward to my nine mile bike ride back to the lodge. It was really more of a slog than a bike ride, but fortunately I had my six count rhythm to keep me company. I was entertained by waving at everyone who passed me, however, and they both seemed like nice people. 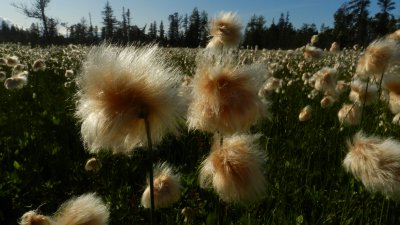 I stopped in my field full of Thom Heads for a break. They were brightly lit up with the afternoon sun, and it was a welcome break from my toil. I continued on, running different bear scenarios through my head. I was blinded by the bright sunlight I was biking directly into, and the deep shadows of the forest were black in contrast. If a bear took a dislike to me, and decided to press the situation there was very little I could do about it. I was stuffed on pizza, and was not moving fast. I needed a bed, not a bike, and I decided I was probably a tasty looking long ravioli on wheels.

After an eternity, I finally hit the only downhill stretch of my ride and coasted back down to the lodge. It was a very welcome sight, and I was happy to get my saddle sore ass off that bike seat. 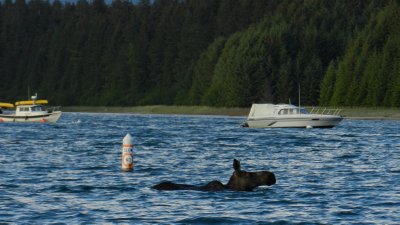 I spent the remainder of my day off reading down by the water on the dock. A couple passed by talking excitedly of a moose swimming by. I looked out at the water, and sure enough, it was a moose! I grabbed my camera and ran down to the end of the dock to get a very close look at it as it swam by. Moose are very good swimmers and this one had crossed from an island well over a mile away. Impressive. It reached the far shore, climbed out and ran off into the woods. 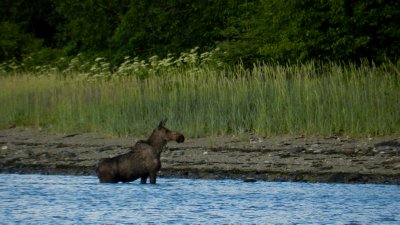 Weary with my efforts of the day, and quite satisfied. I settled into my comfortable bunk for an uninterrupted slumber.