A vignette of a wandering man.

I met Robert down in Arizona. I had just parked my van at the Sugarloaf Mountain parking lot at the Chiricahua National Monument in southeast Arizona. I got my gear together, for the mile hike to the fire lookout, when I noticed the other van parked in the lot. It was a full size white cargo van, kind of like a kidnappers van, with no windows in the back and it had bumper stickers about vagabonds of Baja, Mexico. Now, I know a fellow vanner when I see one, and there he was, a grizzled old man with full wispy, white beard making chin music at me, as he ate his bologna sandwich. I walked up and said hi, and we talked a bit about Sugarloaf Mt.

I then headed up, leaving him to enjoy his lunch. It was an easy hike, uphill for a mile one way, but on top I could see for miles in every direction. I sat up on the stoop of the fire spotters building drinking water and systematically chowing down on a sack of pistachios. I hoped the old man would appear, as I wanted to talk with him some more. He looked like a kindred spirit, and an interesting man to talk to. I finished my pistachios, and decided it was time to head back down and find a campsite. On my way down, I ran into the old man, who was slowly working his way up. He asked me how long I spent up on top. I said, “Long enough for me to eat a small bag of pistachios.”
He looked at me for a second and asked, “That’s how you measure time?”
I told him it was the best way that I knew of. He chuckled, and we parted ways.

I got a site in the nice campground, and was sitting up in an oak tree playing my banjo when I saw the white van pull into the campground and drive by. I realized that the old guy in the van could easily be my future self. He lives in his van, he visits beautiful places, he has bumper stickers claiming his title of vagabond, he still goes hiking up lonely mountains. It was kind of eerie, but in a cool way. I decided that I’d go and talk to him the next day, if he didn’t come find me.

The next day I got up early and drove to the trailhead of the “big loop.” I hiked the 12 miles through the beautiful and rugged “heart of the rocks” and hiked my way back to the trailhead. As I made my way through the milling cows of tourists, I saw the old guy walking towards the trail, and I stopped to say hello. This time I introduced myself, and learned his name was Robert. We talked for awhile about the trail, where I had hiked, and the wildlife around. It was enjoyable. I got the feeling that the nice smelling, well dressed tourists were giving us a wide berth. I was all sweaty, unshaven, dusty, and rumpled; what I usually look like after a long hike. Robert was grizzled as usual, wearing his watch hat, old jeans, a down vest with his walking stick. He looked like an old sailor, which in fact he was. I later learned he used to be a sailor on the Great Lakes, working as an able-bodied seaman on the ore freighters. We must have been the motliest pair there, but we were having a good conversation. I bid him to have a good hike, and to look me up when he got back to camp.

We talked a couple more times in the next two days. Robert was a sailor for awhile before he got tired of it and moved to Washington to work on the ferries around Seattle. Robert is a long haul traveler, living out of his van. He spends his winters away from his home in southern Washington, rarely paying for camping, and traveling anywhere from Baja California in Mexico over to Texas. He listens to classical music, reads thick, dusty books on various subjects that few others will open. He is kind of a curmudgeon. He knew more about the Russian revolution than any man I’ve ever met. He told me, “I’m going to write my own damn book about it. Nobody else can get it right.”

In the night, I could hear Robert coughing hard. He’d hack something up, and it’d get quiet, than he’d be back at it, hacking, trying to clear his lungs. It was hard to listen to. In the morning, I went over to see him. He looked older, and tired, I imagine he didn’t get much sleep. He said he was going to Tucson to the hospital. He said he caught a fungal disease down in Mexico, and it troubled him from time to time. I wished him well, and said goodbye.

As I drove away, I couldn’t help but think about Robert. He was kind of an inspiration to me. I hope that when I’m up in my seventies that I’m still hanging out with a bunch of vagabonds down in Mexico, or hiking to the top of a 7000 ft high mountain. I hope he finds better health. I was glad to have met Robert. He seemed kind of a loner, as a lot of us long term travelers are. Before I left, I asked him if I could take his picture. I explained that I like to take portraits of interesting people I meet along the road, and he agreed, but he wanted to put on his good hat for the picture. I laughed and told him that would be just fine. 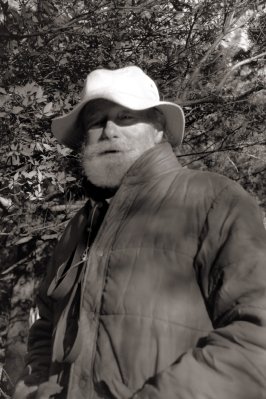 Posted by Rhombus 18:06 Archived in USA